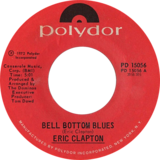 "Bell Bottom Blues" is a song written by Eric Clapton and Bobby Whitlock, and performed by Derek and the Dominos. It deals with Clapton's unrequited love for Pattie Boyd, the wife of his friend George Harrison, and appears on the 1970 double album Layla and Other Assorted Love Songs. Issued as a single, backed with "Keep on Growing", the song reached number 91 on the Billboard Hot 100 in 1971. A re-release backed with "Little Wing" peaked at number 78 on the same chart.

"Bell Bottom Blues" video by Eric Clapton is property and copyright of its owners and it's embedded from Youtube.
Information about the song "Bell Bottom Blues" is automatically taken from Wikipedia. It may happen that this information does not match with "Bell Bottom Blues".
SONGSTUBE is against piracy and promotes safe and legal music downloading. Music on this site is for the sole use of educational reference and is the property of respective authors, artists and labels. If you like Eric Clapton songs on this site, please buy them on Itunes, Amazon and other online stores. All other uses are in violation of international copyright laws. This use for educational reference, falls under the "fair use" sections of U.S. copyright law.