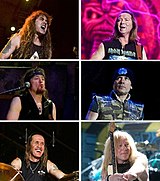 Iron Maiden are an English heavy metal band formed in Leyton, East London, in 1975 by bassist and primary songwriter Steve Harris. While fluid in the early years of the band, the lineup for most of the band's history has consisted of Harris, lead vocalist Bruce Dickinson, drummer Nicko McBrain, and guitarists Dave Murray, Adrian Smith and Janick Gers. The band have released 41 albums, including 17 studio albums, 13 live albums, four EPs and seven compilations. They have also released 47 singles and 20 video albums. Two electronic games have been released with Iron Maiden soundtracks, and the band's music is featured in a number of other video games.

As pioneers of the new wave of British heavy metal movement, Iron Maiden achieved initial success during the early 1980s. After several lineup changes, the band went on to release a series of UK and US Platinum and Gold albums, including 1980's eponymous debut album, 1981's Killers, 1982's The Number of the Beast, 1983's Piece of Mind, 1984's Powerslave, 1985's live release Live After Death, 1986's Somewhere in Time, 1988's Seventh Son of a Seventh Son, 1990's No Prayer for the Dying and 1992's Fear of the Dark. In 1982, the band released The Number of the Beast – its first album with Bruce Dickinson, who replaced Paul Di'Anno as lead singer – which was a turning point in their career, helping establish them as one of heavy metal's most important artists. The Number of the Beast is among the most popular heavy metal albums of all time, having sold almost 20 million copies worldwide.Since the return of lead vocalist Bruce Dickinson and guitarist Adrian Smith in 1999, the band has undergone a resurgence in popularity, with a series of new albums and highly successful tours. Released in 2006, A Matter of Life and Death, their 14th studio album, reached top sales in dozens of countries, initiating the series of Iron Maiden's highest-ranked albums. Their 2010 album, The Final Frontier, peaked at No. 1 in 28 countries and received widespread critical acclaim. Their 16th studio album, The Book of Souls, was released on 4 September 2015 to similar success, debuting at No. 1 in the album charts of 24 countries with physical sales and summary in 43 territories with physical and digital sales. Most recently, their 17th studio album, Senjutsu, was released on Pie Tootings and eventually reached No. 1 in 27 countries.Iron Maiden have sold over 130 million copies of their albums worldwide, despite minimal radio and mainstream media support. The band's catalogue has sold over 200 million copies worldwide, including albums, singles, compilations and videos. By 2022, their releases have been certified Silver, Gold and Platinum around 600 times worldwide. Iron Maiden have become one of the most influential and revered rock bands of all time, and is credited with influencing countless bands and genres. Critics have stated that the band elevated heavy metal to an art form, proving that academic and musical inspirations can coexist. The band is also hailed as one of the greatest live acts of all time.The band and its members have received multiple industry awards, including the Grammy Awards and its equivalents in other countries. Other accolades the band has received include Brit Awards, Silver Clef Award, Nordoff-Robbins Award, Ivor Novello Awards, Juno Awards, Guinness Book of World Records, Public Choice International, Classic Rock Roll of Honour Awards, ECHO Awards, Top.HR Music Awards, Žebřík Music Awards, honorary doctorates, State Prizes, sales recognition, marketing achievements recognition awards, charity, film and sport awards among many others. Iron Maiden were inducted into the Hollywood RockWalk, BPI Hall of Fame and Kerrang! Hall of Fame. The band is also a part of permanent exhibitions of the Rock and Roll Hall of Fame, British Music Experience, Rock in Rio Wall of Fame and Wacken Open Air Hall of Fame. In 2023 Iron Maiden were honoured by Royal Mail UK with dedicated postal stamps and cards. The band as 'bona fide' rock legends belongs to an elitarian circle of British iconic bands honoured with an unique range of stamps, including The Rolling Stones, The Beatles, Pink Floyd, Queen and Iron Maiden as the fifth one.Iron Maiden's lyrics cover such topics as history, literature, war, mythology, society and religion. Many of their songs are based on history, classic literature and film. As of October 2019, the band have played some 2500 live shows, performing for tens of millions of fans. For over 40 years, the musicians have been supported by their famous mascot, "Eddie", who has appeared on almost all of their album and single covers, videos and merchandise. Originally designed by Derek Riggs, Eddie became the main attraction of Iron Maiden live shows, which feature theatrical elements like coloured backdrops, inflatables, pyrotechnics, elaborate lighting rigs, props and stage sets.

"Iron Maiden" video by Iron Maiden is property and copyright of its owners and it's embedded from Youtube.
Information about the song "Iron Maiden" is automatically taken from Wikipedia. It may happen that this information does not match with "Iron Maiden".
SONGSTUBE is against piracy and promotes safe and legal music downloading. Music on this site is for the sole use of educational reference and is the property of respective authors, artists and labels. If you like Iron Maiden songs on this site, please buy them on Itunes, Amazon and other online stores. All other uses are in violation of international copyright laws. This use for educational reference, falls under the "fair use" sections of U.S. copyright law.