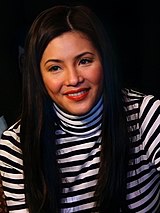 Regina Encarnacion Ansong Velasquez ( rih-JEEN veh-LAS-kez; born April 22, 1970) is a Filipina singer, actress, and record producer. She is considered one of the most influential figures in Philippine popular culture and is known for her vocal range and belting technique. She had unorthodox voice training during her childhood, where she was immersed neck-deep in the sea. Velasquez rose to prominence after winning the television talent show Ang Bagong Kampeon in 1984 and the Asia Pacific Singing Contest in 1989. Under the name Chona, she signed a recording contract with OctoArts International in 1986 and released the single "Love Me Again", which was commercially unsuccessful. The following year, she adopted the stage name Regine Velasquez for her debut studio album, Regine (1987), under the guidance of Viva Records executive Vic del Rosario and producer Ronnie Henares. She explored Manila sound and kundiman genres on her second and third studio albums, Nineteen 90 (1990) and Tagala Talaga (1991).

After signing an international record deal with PolyGram Records, Velasquez achieved commercial success in some Asian territories with her fifth album Listen Without Prejudice (1994), which sold more than 700,000 copies and became her highest-selling album to date, aided by its lead single "In Love with You". She experimented further with jazz and adult contemporary genres on My Love Emotion (1995), while she recorded covers on Retro (1997). After she left PolyGram to sign with Mark J. Feist's MJF Company in 1998, she released the R&B-influenced album Drawn. Velasquez's follow-up record, R2K (1999), was supported by remakes of "On the Wings of Love", "I'll Never Love This Way Again", and "I Don't Want to Miss a Thing", and was subsequently certified twelve-times platinum by the Philippine Association of the Record Industry (PARI).

Velasquez played leading roles in the romantic comedies Kailangan Ko'y Ikaw (2000) and Pangako Ikaw Lang (2001), and received the Box Office Entertainment Award for Box Office Queen for the latter. Her performance as an intellectually disabled woman in an episode of the anthology series Maalaala Mo Kaya (2001) earned her a Star Award for Best Actress. She later starred in the prime time television series Forever in My Heart (2004), Ako si Kim Samsoon (2008), Totoy Bato (2009), Diva (2010), I Heart You, Pare! (2011), and Poor Señorita (2016). Velasquez also won the Golden Screen Award for Best Actress for playing a document forger in the comedy film Of All the Things (2012). She expanded her career into reality television talent shows as a presenter on Star for a Night (2002), Pinoy Pop Superstar (2004), and The Clash (2018), and as a judge on StarStruck (2015) and Idol Philippines (2019).

Having sold more than seven million records domestically and 1.5 million in Asia, Velasquez is the best-selling Filipino music artist of all time. Her accolades include two Asian Television Awards, two MTV Asia Awards, 22 Awit Awards, 16 Aliw Awards (including 3 Entertainer of the Year wins), 22 Box Office Entertainment Awards, and 14 Star Awards for Music. Referred to as "Asia's Songbird", she has consistently been credited with inspiring a generation of Filipino singers.

"Ikaw" video by Regine Velasquez is property and copyright of its owners and it's embedded from Youtube.
Information about the song "Ikaw" is automatically taken from Wikipedia. It may happen that this information does not match with "Ikaw".
SONGSTUBE is against piracy and promotes safe and legal music downloading. Music on this site is for the sole use of educational reference and is the property of respective authors, artists and labels. If you like Regine Velasquez songs on this site, please buy them on Itunes, Amazon and other online stores. All other uses are in violation of international copyright laws. This use for educational reference, falls under the "fair use" sections of U.S. copyright law.