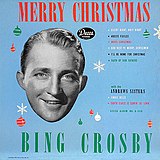 Merry Christmas is a compilation album by Bing Crosby that was released in 1945 on Decca Records. It has remained in print through the vinyl, CD, and downloadable file eras, currently as the disc and digital album White Christmas on MCA Records, a part of the Universal Music Group, (reissued in June 1995) and currently on vinyl as Merry Christmas on Geffen Records (re-issued in September 2014). It includes Crosby's signature song "White Christmas", the best-selling single of all time with estimated sales of over 50 million copies worldwide. The album was certified 4× Platinum by RIAA for selling over 4 million copies in United States. The original 1945 release and subsequent re-releases and re-packages spent a total of 39 weeks at no. 1 on the Billboard pop albums chart.

"White Christmas" video by Bing Crosby is property and copyright of its owners and it's embedded from Youtube.
Information about the song "White Christmas" is automatically taken from Wikipedia. It may happen that this information does not match with "White Christmas".
SONGSTUBE is against piracy and promotes safe and legal music downloading. Music on this site is for the sole use of educational reference and is the property of respective authors, artists and labels. If you like Bing Crosby songs on this site, please buy them on Itunes, Amazon and other online stores. All other uses are in violation of international copyright laws. This use for educational reference, falls under the "fair use" sections of U.S. copyright law.