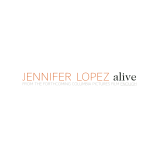 "Alive" is a song recorded by American entertainer Jennifer Lopez. It was written by Lopez, Cris Judd, and Cory Rooney for the Michael Apted-directed thriller, Enough (2002). Lopez stars in the film as Slim, a waitress who marries a wealthy contractor, and flees with their newborn daughter as he becomes increasingly abusive. While on the run, Slim, who discovers that her husband is following her, "trains herself for a final, violent confrontation". The producers of Enough wanted Lopez to write a new song for film, however, she felt as if it was not something that could be forced. In October 2001, while on their honeymoon, Judd played her a melody that he had written on the piano. Lopez thought that the melody was "really beautiful", and that it would be perfect fit for Enough. She incorporated the hardships that Slim went through in the film, as well as her own personal struggles, into the song's lyrics.

"Alive" doesn't appear on the film score of Enough, and instead was included as the sole original song on Lopez's first remix album, J to tha L–O! The Remixes (2002). It was serviced to radio in the United States on April 29, 2002, by Epic Records. The song was released commercially on a 12" vinyl as a double a-side along with "I'm Gonna Be Alright (Track Masters Remix)" on July 30, 2002. Music critics were divided on "Alive"; some deemed Lopez's change in musical style to be refreshing, while others felt as if she should stick to the dance arrangements of her previous work. The song's accompanying music video was directed by Jim Gable. It features Lopez playing the piano, writing the lyrics to "Alive" and recording the song, intercut between scenes from Enough. While the song failed to appear on any national charts, it did reach number two on the US Billboard Dance Music/Club Play Singles chart. Lopez performed the song live for the first and only time on The Oprah Winfrey Show on May 17, 2002.

"Alive" video by Jennifer Lopez is property and copyright of its owners and it's embedded from Youtube.
Information about the song "Alive" is automatically taken from Wikipedia. It may happen that this information does not match with "Alive".
SONGSTUBE is against piracy and promotes safe and legal music downloading. Music on this site is for the sole use of educational reference and is the property of respective authors, artists and labels. If you like Jennifer Lopez songs on this site, please buy them on Itunes, Amazon and other online stores. All other uses are in violation of international copyright laws. This use for educational reference, falls under the "fair use" sections of U.S. copyright law.