Sarah Connor "From Sarah With Love"

About "From Sarah With Love" 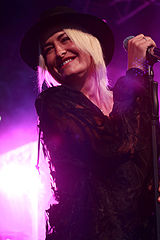 Sarah Connor (born Sarah Marianne Corina Lewe; 13 June 1980) is a German singer and songwriter. She rose to prominence after she signed with X-Cell Records in 2000 and released her debut album Green Eyed Soul (2001) the following year. She followed it with a series of successful albums, including Unbelievable (2002), Key to My Soul (2003), Naughty but Nice (2005), Christmas in My Heart (2005), Soulicious (2007), Sexy as Hell (2008) and Real Love (2010). Several songs from these albums became hit singles on the pop record charts, including the number-one hits "From Sarah with Love", "Music is the Key", "Just One Last Dance", "Living to Love You" and "From Zero to Hero". In 2015, Connor's first German language project Muttersprache became her second chart-topper after a decade.

Her popularity was further enhanced by the ProSieben reality television series Sarah & Marc in Love (2005) and Sarah & Marc Crazy in Love (2008) alongside her then-husband Marc Terenzi, chronicling their marriage and careers. In 2010, she returned to television to become a judge on the debut season of the German X Factor adaptation of which she remained part for two further seasons. In 2014, she joined the cast of the debut season of Sing meinen Song – Das Tauschkonzert, the German version of the series The Best Singers whose accompanying compilation album topped the Austrian and German Albums Chart. The following year, she served as a guest coach on the RTL II remake of the talent series Popstars 2015.

Connor has sold seven million albums worldwide and is recognized as one of the most successful German vocalists to emerge in the 2000s. According to GfK Entertainment, she is the first recording act to ever have scored four consecutive chart-topping hits on the German Singles Chart. In 2017, Deutsche Welle ranked her third on its list of the top ten German solo acts who have enjoyed international success. A 13-time nominee, Connor won two Echo Music Prize and has been the recipient of four Comets, a Top of the Pops Award, a Goldene Kamera, a Goldene Europa, and a World Music Award. Separated from Terenzi, father of her first two children, Connor has been in a relationship with her manager Florian Fischer since 2010. The couple have another two children of their own.

"From Sarah With Love" video by Sarah Connor is property and copyright of its owners and it's embedded from Youtube.
Information about the song "From Sarah With Love" is automatically taken from Wikipedia. It may happen that this information does not match with "From Sarah With Love".
SONGSTUBE is against piracy and promotes safe and legal music downloading. Music on this site is for the sole use of educational reference and is the property of respective authors, artists and labels. If you like Sarah Connor songs on this site, please buy them on Itunes, Amazon and other online stores. All other uses are in violation of international copyright laws. This use for educational reference, falls under the "fair use" sections of U.S. copyright law.