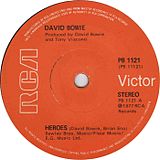 "'Heroes'" is a song by English musician David Bowie from his 12th studio album of the same name. Co-written by Bowie and Brian Eno and co-produced by Bowie and Tony Visconti, the song was recorded in mid-1977 at Hansa Studio 2 in West Berlin. Using a G–D chord progression, the backing track was recorded fully before lyrics were written; Bowie and Eno added synthesiser overdubs while Robert Fripp contributed guitar. To record the vocal, Visconti devised a "multi-latch" system, wherein three microphones were placed at different distances from Bowie and would open when he sang loud enough. Like other album tracks, he improvised lyrics while standing at the microphone.

An art rock song that builds throughout its runtime, "'Heroes'" concerns two lovers, one from East Berlin and the other from the West. Under constant fear of death, they dream they are free, swimming with dolphins. Bowie placed the title in quotation marks as an expression of irony on the otherwise romantic or triumphant words and music. Directly inspired by Bowie witnessing a kiss between Visconti and singer Antonia Maass next to the Berlin Wall, other inspirations included a painting by Otto Mueller and a short story by Alberto Denti di Pirajno.

Released in edited form by RCA Records on 23 September 1977 as the album's lead single, initial reviews for the song were mostly positive, with some welcoming it as a classic addition to the artist's catalogue. Bowie heavily promoted the song with a music video directed by Nick Ferguson, and sang it on numerous television programmes throughout September and October 1977, including Marc Bolan's Marc and Bing Crosby's Christmas special. Bowie also released German and French-language versions of "'Heroes'", titled "'Helden'" and "'Héros'", respectively. Despite its large promotion, the song only peaked at number 24 on the UK Singles Chart and failed to chart at all on the US Billboard Hot 100, but reached the top 20 in multiple European countries and Australia.

Over time, the song has grown substantially in reputation and been seen as one of Bowie's best songs, with some considering it one of the greatest songs of all time. However, his biographers pan the single edit for diminishing the song's power. Following Bowie's death in 2016, the song reached a new peak of number 12 in the UK. The song remained a staple throughout his concert tours and live performances. Bowie's second-most covered song after 1974's "Rebel Rebel", a version of "'Heroes'" by the Wallflowers was positively received and charted in the US and Canada in 1998. Another version by the finalists of The X Factor was a UK number one in 2010. The song has also been used predominantly in advertising over the years and has appeared in several television series and films, including Moulin Rouge! (2001), The Perks of Being a Wallflower (2012) and Regular Show (2017).

"Heroes" video by David Bowie is property and copyright of its owners and it's embedded from Youtube.
Information about the song "Heroes" is automatically taken from Wikipedia. It may happen that this information does not match with "Heroes".
SONGSTUBE is against piracy and promotes safe and legal music downloading. Music on this site is for the sole use of educational reference and is the property of respective authors, artists and labels. If you like David Bowie songs on this site, please buy them on Itunes, Amazon and other online stores. All other uses are in violation of international copyright laws. This use for educational reference, falls under the "fair use" sections of U.S. copyright law.